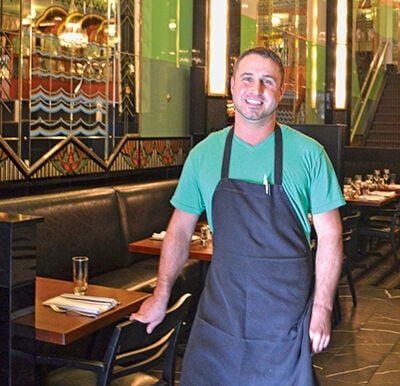 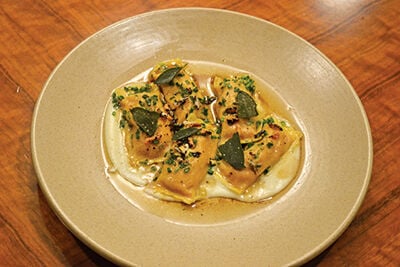 "I don’t have a filter," Joe Rolle cautions me as we sit down in the kitchen at Il Foro, the downtown Minneapolis restaurant breathing new life into what was the Forum Cafeteria. "And I swear a lot—but I’ll try to keep it under control."

Rolle, who’s been leading the kitchen at Il Foro since its June opening, spent the previous two years at critically acclaimed North Loop restaurant Borough. Never in a restaurant setting growing up, the 35-year-old grins when asked about his path from the Iron Range to filling fresh agnolotti with squash puree.

"My dad wouldn’t give me any more money for college," he continues. "That’s when my aunt suggested culinary school."

Always cooking for friends in college, Rolle got addicted to pleasing people. He also reflected on the many meals he shared with family in Chisholm and how food never failed to bring people together.

"It didn’t matter if I was in an argument with my dad or whatever, the hatchet was buried when we sat down to dinner."

After a stint at Palomino, where Rolle said he was so clueless initially he didn’t even know what the line was—"I thought it was cocaine," he laughs—Jack Riebel (now a partner in Il Foro) gave him a chance at the Dakota Jazz Club and Restaurant. "That's where I got hooked. I loved the knowledge, the speed, the energy, learning new flavors and techniques."

Today at Il Foro, Rolle is in his element.

"I’m 75 percent Italian, so the Italian-inspired concept definitely sparked something in me," he says. "I’m really proud [of my heritage]. All this local, seasonal, organic [stuff], the Italians were doing that hundreds of years ago."

The menu is Rolle’s modern take on classic Italian: paccheri with fennel sausage; red wine rigatoni; Dario’s rabbit cacciatore (his grandfather’s recipe). And while the reviews and feedback have been largely positive, Rolle did take notice of some guest comments noting the menu descriptions—essentially ingredient highlights—were somewhat off-putting. He made some necessary, if slightly painful, adjustments.

"Can I call this macaroni carbonara?" he says, pointing to hand-written changes on the menu. "That kind of hurts the chef in me, but at the same time I don’t want someone not to order something because they’re intimidated."

Mindful of the need to ultimately make money, dishes such as meatballs and spaghetti are on the dinner menu. For lunch, a new version of the Parlour burger Rolle created when he was at Borough is a top seller. But you won’t be ordering it for dinner.

"For lunch, I for sure put my ego to the side, what’s left of it," he says. "It’s a different monster at lunch. People want sandwiches and soup and they want to be out in 45 minutes.

"But I also have a serious obligation to these people in the kitchen to keep them interested," he continues. "At dinner, the people that come to work for me, they didn’t come here to flip burgers."

Wanting to build the type of kitchen environment he’d always envisioned—"it’s a creative playground—Rolle invites cooks to come in early or on their day off to try new ideas or techniques. That kind of continuing education is proving crucial to retaining top talent, Rolle notes.

"You walk in and it’s stunning," he says. "We really need to get Midwestern people to look at this and not think it’s fine dining. My goal is to keep the menu approachable and the price points approachable."

Scoop out squash and yams while hot. Add other ingredients and blend in Robot Coupe until smooth. Put filling in piping bag. Roll pasta and fill.

Place all ingredients in a vacuum bag. Cook in immersion circulator at 85 degrees Celsius until tender. Puree in blender, adding additional cold butter and pinch of salt. Pass through chinois.