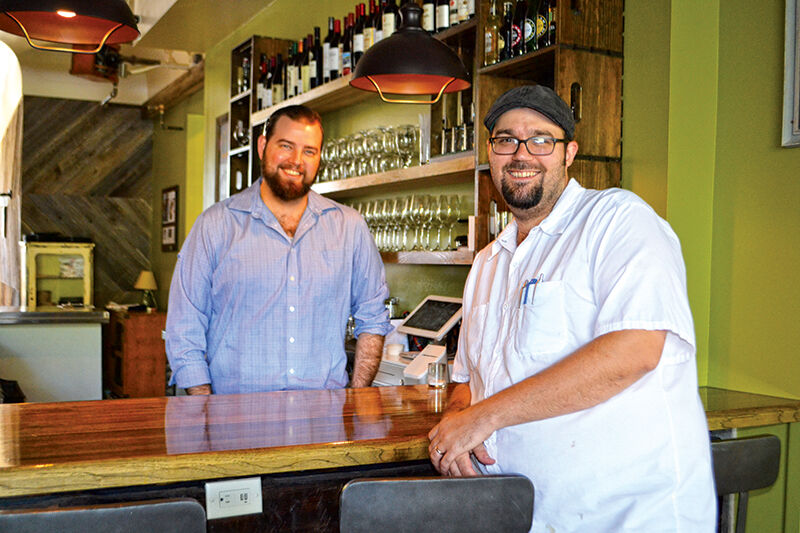 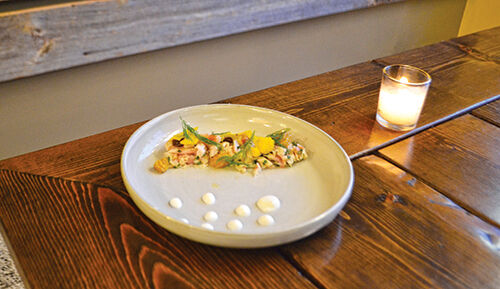 It’s grammar, however, that gets a rise out of them, not conjugating verbs in a foreign language. Which begs the question: So what did happened to the civility of language in serving? When did "you still working on that?" replace, "may I take your plate?"

"How you say things, why you say things, that affects people’s experiences (in a restaurant)," Evans says. So it’s important that even though the service is casual, it’s correct. Their biggest pet peeve: negatives, especially double negatives.

Want to see Evans’ head spin around? Have a server respond to a guest’s sincere thank you with "no problem" or "no worries." "I detest ‘no worries,’" he says. "It’s two negatives words strung together for a positive thing." What does he suggest? "My pleasure," he stresses. "Or you’re welcome. What’s wrong with you’re welcome?"

As if catching himself midstride, Evans grins sheepishly as he adds, "I’m fond of grammar and words."

So, fortunately, is Jorgenson.

At just 28, Jorgenson looks a bit like a hipster with a tucked-in shirt—tall, with a semi-groomed beard and his sleeves rolled up. An eager kid with polish, maturity and a degree in psychology. Evans, on the other hand, is the philosopher chef. A bit disheveled, pleasantly quirky and infatuated with creative food, his St. Paul neighborhood location and his patrons. "I’m not sure why, but we get a lot of super delightful folks," he says. "A good mix of first-time diners and regulars."

The two of them worked together at WA Frost, before Evans quit to open his own restaurant. Since that time, "I’ve always wanted to work for Wyatt," Jorgenson says. "(But) never found the right fit. I wanted an upward move, not lateral."

That upward mobility came about around six months ago when Heirloom’s GM moved on and "he was first on my list," Evans says about Jorgenson.

"Wyatt’s been a great mentor, I knew that this would be good learning experience and that was important," he says. Having a chef/owner who supports the culture and staff and what it takes to run the front of the house was important to him.

"I didn’t want to just do something for the money," Jorgenson says.

Evans starts to add his take, then pauses and turns to Jorgenson and says, "I’m glad to hear you say that, by the way."

Evans knows the challenges of front of the house. "The customer’s always right, ‘til they’re not," he tells his servers. Just recently on Jorgenson’s day off, and a night "when we had too many reservations," a couple came in with no reservations and insisted they sit at a table for six in the back. Evans tried to dissuade them, but they refused to budge, promising to finish in 40 minutes when the table was needed. "As an operator I didn’t want to roll the dice," he says. "I knew the food might take longer because we were really busy." And he also knew them as prolific Yelpers. "Everyone’s a Yelper" these days, he adds. So every guest contact is more critical than in years past.

"We want everyone to have a food-critic experience," he says, and to that end he found a way to accommodate the couple short of a table for six, so he could return to the kitchen to cook.

"My goal is to have a business that sustains itself and people have jobs," he says. "I’ve got a wife and two kids and a mortgage, so I don’t want to float, I want to build a good business." Which is the long version of saying he appreciates what Jorgenson and the front-of-house staff shield him from.

Evans describes Heirloom as "modern farmhouse cuisine." "I hate the farm-to-table term. All food comes from a farm; we eat at a table. That’s Alice Waters' timeframe," he says about the term, when a dish of a single radish on a plate was lauded for who grew it. Waters, an activist restaurateur in Berkeley, California, was instrumental in the organic and farm-to-table movement in the ‘70s.

The challenge for today’s restaurateur, he says, is "we need to motivate someone to eat that radish at the restaurant as opposed to buying it at a co-op and preparing it at home."

Ironically, Evans isn’t making fun of the solitary radish dish, because a lone radish is Heirloom’s logo and the subject of much of the restaurant’s artwork. A quick glance at the menu unearths Sweet Corn Cappellacci, Seed and Grain Porridge with poached egg, Smoked Whitefish, and, not surprisingly, no dish with just a single radish. He leaves that to his artwork.

He is over milking farm-to-table as a sales tool. "We’ve stopped printing the names of the farms (the food’s pedigree) on the menu," he says, but if guests want to know its origin, servers know the specifics. But his food is fresh and local and the menu follows a seasonal availability. And while he likes to change the menu four times a year, it can get tricky. Regulars have favorites that they don’t like to see rotate off the menu.

Evans’ food is complex and delicious, "but I try not to be an egotistical chef that makes it all about me." Nor is it all about the food. "We’re about showering attention on guests," he says. "We’re all about authentic hospitality. No judgment, no rhetoric, no manifesto food."

To that end, Jorgenson’s degree in psychology isn’t wasted in the dining room.

"It’s handy in this industry," Evans says. "John’s had to talk me back from hasty decisions."

And that’s why the relationship works so well. "He knows I’ll challenge him when need be," Jorgenson says. "It’s important to have that comfort level."

Going from assistant to a general manager is a big step in a fast-paced, human-capital-laden business, so Evans is good about filling in the gaps. "He knew I needed wine knowledge," Jorgenson says, so Evans made sure to invite the GM to sit in on wine-educational sessions. And both can be found filling in at the dishwashing stations at times.

And because restaurants can have drama—"not so much here" Jorgenson says—knowing quite a bit about psychology is a boon. It also comes in handy when teaching servers how to read a guest in order to provide the right level of humor, attention and engagement.

"Being more than just a chef, I have a vested interest in everything (that goes on in his restaurant)," Evans says. "The thrill is being involved in someone’s journey, to put them on the right path. That’s what I’d prefer to be remembered for, not just good food."

And while that’s an admirable goal, it’s going to be hard to not have diners remember you for that delicious bowl of onion soup topped with a crisp cheese hat. Plus all those "Interesting Vegetables" on the menu.

4-5 raisins, plumped in a mixture of 1 cup water to 1/2 cup dissolved sugar

Toss whitefish with oil and chives. Using a squeeze bottle, decorate a plate with dots of yogurt, be creative and have fun. Place whitefish on plate in a little line off of center, top with shaved cauliflower and raisins.

In medium saucepot, bring milk up to 200°, stirring occasionally. Remove from heat and allow to cool to 115°. Once milk reaches 115°, temper with 1/2 cup yogurt. Whisk until smooth. In large bowl combine remaining 1/2 cup of yogurt with milk. Whisk until smooth. Using a funnel, transfer to sanitized mason jars. Lid jars. Place in a circulating water bath set to 110° for 4-6 hours. Make sure water reaches the depth of the yogurt in the jar. Once yogurt has fully cultured, cool in ice bath. Before use, drain whey from yogurt and hang in cheesecloth until desired consistency is reached; usually 1 hour.