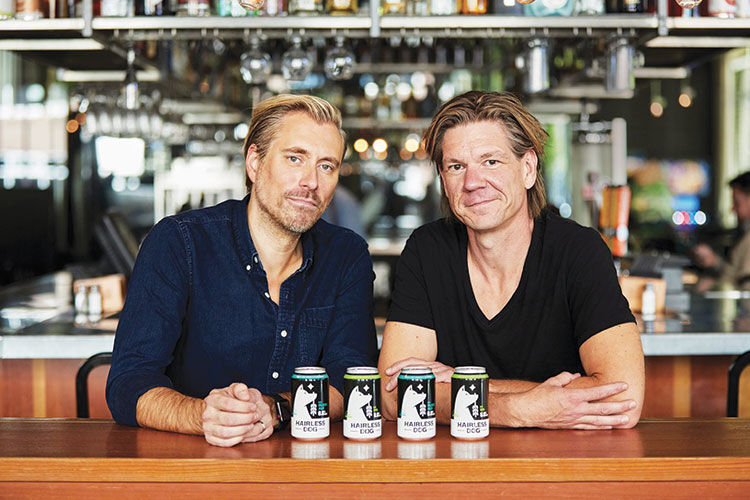 Paul Pirner, right, has the role of chief operating officer, and Jeff Hollander is CEO, as well as sales and marketing. The business partners self-funded Hairless Dog Brewing Co. 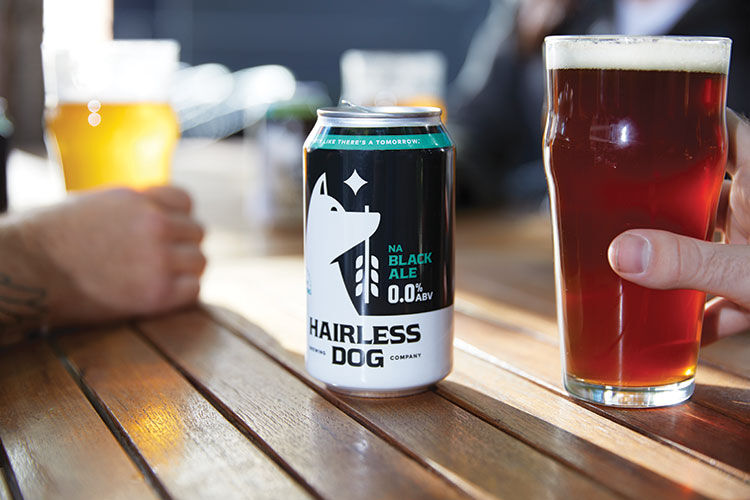 The beers are gaining popularity with both the sober curious and workers like first responders who want to enjoy social distancing without that neon sign flashing that they’re not imbibing.

Paul Pirner, right, has the role of chief operating officer, and Jeff Hollander is CEO, as well as sales and marketing. The business partners self-funded Hairless Dog Brewing Co.

The beers are gaining popularity with both the sober curious and workers like first responders who want to enjoy social distancing without that neon sign flashing that they’re not imbibing.

“We were the only ones walking around without a drink in our hand,” Hollander says, adding that the experience felt awkward.

Not too long after, the two met for coffee and came up with the idea of brewing a nonalcoholic beer that was as full-bodied as a craft beer and didn’t sport a neon sign announcing it was nonalcoholic.

They named their collaboration Hairless Dog Brewing Co., a nod to the old saying about the remedy of “the hair of the dog,” or another alcoholic drink, to ward off a hangover.

“People like having something in their hands that’s not water or soda,” Hollander says, about not only parties but dining out. And consequently, bars and restaurants like having a nonalcoholic drink they can sell that doesn’t necessitate the free refills soft drinks do.

“Paul once said he wants Hairless Dog known for what it is, rather than what it’s not,” Hollander says. What it is, they contend, is all the flavor and nuances of craft beer brewed without alcohol, as opposed to having to remove the existing alcohol. The difference in brewing a beer with no alcohol and brewing one where the alcohol is removed is akin to a glass of water versus a glass of melted ice. The chemistry is different, he says.

Pirner, who was a home brewer, started researching both recipes and techniques and discovered most of the available information was on how to distill the alcohol out of a product. He started creating his own recipes through trial and error, “with a lot of error,” he says with a laugh. One experiment gone wrong led to a bottle cap lodged permanently in his basement’s ceiling and a syrupy mess on the floor. “I left a hole in the ceiling as a reminder of how careful you need to be,” Pirner says.

The process he came up with creates big, bold, darker flavors, that are more akin to craft beer than other non-alcohol beers on the market. The mouth feel is different, Pirner says, and mouth feel is why craft beers gained popularity with serious beer snobs.

They found a co-packer and through their network of friends were able to get the beer into restaurants and liquor stores. It sold out quickly, and then it became an exercise in scaling up.

“Bars and restaurants are core to our company,” Hollander says. “People will try something new in a bar first.” While drinkers tend to be more adventurous when they can order just one bottle in a bar, “we do see most of revenue from liquor stores and grocery stores,” he adds. A handful of restaurants where you can find the product include, George and the Dragon, Pizzeria Lola, Black Sheep Pizza and Murray’s. Haskell’s Minneapolis also carries it. And it’s not just local, the young company already has distributors in 12 states and retailers in 35.

Their top-selling flavor is an IPA, which is reflective of the craft brew market right now, “but our citrus is gaining in popularity,” Pirner says. Other styles are Black Ale and Coffee Stout.

We asked a couple of beer drinkers on staff to try out the beer and the reports were positive. Not only did they like the flavor, they said poured in a glass there was no difference in its appearance to the alcohol version.

Millennials are leading the N/A movement—according to one survey 66 percent say they are cutting back on alcohol, Hollander says, but they aren’t giving up on drinking alcohol all together. The new term is “sober-curious.”

Bars and restaurants are also beefing up their N/A menus, boosting non-alcoholic sales 39 percent this year—which is saying quite a lot since this has been a particularly stressful year.

Alcohol will always be considered a social lubricant, but a rising number of people are finding they don’t want the negatives that also come with drinking, whether it’s a health issue, a lifestyle or fitness choice, a necessity, or as Hollander says, “they have something to do the next day” and they’d rather have a Hairless Dog than the hair of the dog.